“Haunting and wonderful” Telegraph (Folk Albums of the Year)

Jacquelyn performs world-wide as a solo artist, in her trio or as a performer with other bands and projects, playing at many major venues including the QEH, Barbican, Roundhouse, Spitalfields Music Festival, Folk Alliance International 2015 (official showcase artist), Sidmouth Folk Festival among many other venues and festivals.

Her debut CD ‘Silver and Wood’ was released to critical acclaim in 2014. In 2015, this was followed by a UK tour of ‘Silver and Wood’ with the Jacquelyn Hynes Trio supported by Arts Council England; an official show-case artist performance at Folk Alliance International in Kansas, M.O. and a solo tour of Italy for Donne in Musica’s Concert Series ‘Incontri Con Le Compositrici’, which featured the works of six female composers and included two of Jacquelyn’s own works.

Jacquelyn’s Folk/World project Avalonia has featured many leading world and jazz musicians including Najma Akhtar, Stuart Hall, Hossam Ramzi, Zinga Rabhi and Merit-Ariane Stephanos. She was awarded the Katherine McGillivray ‘Get A Life Fund’ for musicians which facilitated an MA in performance at The Irish World Academy completed in 2010.

She has worked for over 30 theatre companies as an actor (“Rare charisma” The Stage) and composed music for theatre including the mad songs for KAOS Theatre’s Hamlet (“A tortured and Pre-Raphaelite Ophelia” – The Stage) the KAOS Kassandra, a song for Merlin at the Riverside Studios London (in which she played Guinevere) and Sinan Unel’s Pera Palas at the Arcola Theatre Dalston and was commissioned by Tyneside Irish Festival to compose the music for their reminiscence theatre piece “Father Cass’ Bodhran”. Recently Jacquelyn appeared as young Sister Bernadette in Sally Mulready’s play “Nun’s Chorus” for the Irish Elders Culture Office.

As an educator, Jacquelyn is Flute and Folk lecturer at Morley College London, Flute and Whistle tutor at the Irish Cultural Centre, London; Folk Whistle Tutor at EFDSS London and Senior Lecturer in Folk at Leeds College of Music. 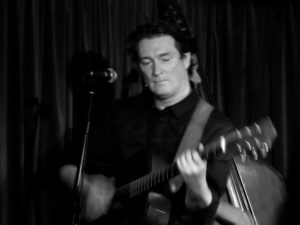 Eoin tours internationally as an Irish Folk singer/contemporary songwriter and works as a traditional accompanist with a variety of instrumental players in the UK and across Europe.

He released his first full studio album ‘Exiles’ under the name J. Owen with Natural5Four Records in 2005. He subsequently released a number of other self penned CD’s as J. Eoin including 2013’s ‘Acrobat’ which was the number one choice on Czech Republic National Radio during December 2014.

‘Sunshowers’, released in March 2018, features songs recorded ‘live in the Rua Room’ during June 2017 and edits from the ‘J Eoin – Live in Toogenblik’ concert recorded in Brussels July 2016.

“J Eoin is a powerful singer, a fine guitarist and a truly gifted songwriter. His background of growing up in the West of Ireland with a native Irish-speaking mother combined with spending his professional years in London has given him a wide range of experiences to draw on for his thoughtful material” – Malcolm Rogers – Irish Post

Listen to a selection of J Eoin’s music here

Coronavirus (COVID-19) update: *7/5/2020* We will remain closed at least until 31 May. We have a weekly programme online with some of our most familiar classes and faces – sign up to our newsletter for access. See you there!