This unusual dramatisation – part solo harpsichord recital by Maggie Cole, part evocation in words – tells the story of one of the 20th century’s most exotic and strikingly individual musical talents: Violet Gordon Woodhouse. Maggie Cole’s previous recitals at WLBC have been very popular, so advance booking is particularly recommended for this event.

Violet (1871 – 1948) grew up at the foot of the South Downs where she showed a remarkable gift for the piano from a very early age. In collaboration with the celebrated harpsichord maker Arnold Dolmetsch, she led the revival in England of pre-Baroque and Baroque music as played on the instruments known to the composers of the time, notably the harpsichord and clavichord.

Violet lived outside conventions of the time, which led her to share her life openly with a group of four very different men, only one of whom was her husband. Her concerts became a magnet for luminaries of the day such as T.E. Lawrence, Ethel Smythe, Siegfried Sassoon, Delius and Wilfrid Owen.

The words of this evocation come from diaries, letters and Violet’s biography by her great niece, Jessica Douglas-Home.

“I am delighted to be bringing this piece to the Centre. It has been dear to me for many years. The intimate and poignant journey it makes through both the world wars and the changing face of England, alongside the story of a remarkable, trail-blazing female musician, seems to me to be ideally suited to a performance at WLBC.” – Maggie Cole

American born, Maggie Cole enjoys an international musical life playing and recording on harpsichord, fortepiano and modern piano. Resident in England, she is best known through numerous recitals on BBC Radio 3 and appearances at leading British festivals. Abroad, she has performed in venues from Seattle to Moscow, and from Finland to India. In addition to a busy solo career, she enjoys duo partnerships with Michael Chance counter tenor, Nancy Argenta and Julia Gooding sopranos, Philippa Davies flute, Steven Isserlis cello and Catherine Mackintosh violin. She also performs regularly with Trio Goya, her fortepiano trio with Kati Debretzeni and Sebastian Comberti, the Nash Ensemble, Britten Sinfonia and her Cambridge USA – based group The Sarasa Chamber Ensemble. With Sarasa she has been able to extend her love of teaching to the development of a program which brings music, improvisation and poetry into facilities for youth offenders.Maggie’s recordings on harpsichord include Bach’s Goldberg Variations, Soler Keyboard Sonatas, Poulenc’s Concert Champêtre, Boccherini Sonatas with Steven Isserlis, Bach flute sonatas with Philippa Davies and the complete Bach violin sonatas with Catherine Mackintosh. On fortepiano, her CD of Haydn trios with Trio Goya will be followed soon by a recording of the Opus 1 Beethoven trios. On modern piano, Maggie has recently released a CD of music by Philippe Gaubert with flautist, Idit Shemer.Maggie is professor of fortepiano at Guildhall School of Music and Drama and teaches early keyboards at Dartington International Summer School. 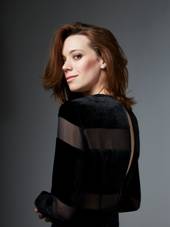 Chloe made her breakout in the acclaimed independent film Shell (2012). For this performance she won Most Promising Newcomer at the British Independent Film Awards 2013 and was nominated for Best British Newcomer at the 2012 BFI London Film Festival.

She has been named as both a BAFTA “Breakthrough Brit” and a Screen International “Screen Star of Tomorrow”.