Dharmavadana, who is co-leading a ‘Wolf at the Door’ creative writing workshop at WLBC on Saturday 18 – Sunday 19 August, on how imagination lies at the heart of our vision, our fascination with life, our creativity, our ability to fully experience our emotions and connect with the world – and what that’s got to do with the name of the workshop.

It’s a question a lot of people ask, for example over breakfast on one of our week-long retreats at Dhanakosa in Scotland, or in a tea break during one of our yearly weekends at the West London or Manchester Buddhist Centres – and why wouldn’t they? It’s a pretty offbeat name for a collection of Triratna Order friends to give themselves, who offer writing workshops up and down the country, even if it trips off the tongue for us: ‘Wolf at the Door is coming to Sheffield’, ‘Check out the Wolf at the Door website’, ‘We’re planning an outdoor Wolf’. We sometimes even call each other ‘Wolves’ in conversation, as in: ‘Vishvantara: she’s a Wolf like me and will be co-leading the weekend’ – which understandably causes some consternation, at least among those new to us. ‘What? Is “Wolf” code for something? Is it an esoteric spiritual title? Or do these people actually believe they’re pack animals of the steppe?’ 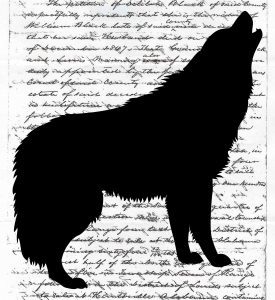 I think I can assure you that none of us in Wolf at the Door believe we are befurred ravaging carnivores of any kind. We are friends who share a love of writing and literature and were inspired to link that enthusiasm to our spiritual practice by two wonderful men, Ananda and Manjusvara. Those two started running writing retreats and workshops back in the late 1990s, and most of us met each other through attending those events – in many cases year after year. We always found that being given a space to plunge into our imaginations in a friendly and supportive context – a space held, if you like, by the Three Jewels – released energies in us (a bit wild, sometimes, yes!) in a way that few other things could. To cut a long story short, when Manjusvara sadly died a few years ago and Ananda decided to retire, ten or twelve of us wanted to carry on their tradition: what we had gained so much from, we wanted others to experience. So now Wolf at the Door – I’m coming to the name! – is a bunch of friends, or a kula, who live in various parts of Britain but come together in pairs or teams to run what we hope are these rather special writing workshops. We resist, by the way, being called a ‘group’ and are certainly not an ‘organisation’!

Of course it was Ananda and Manjusvara, poets as well as teachers, always in search of apt images, who came up with the name. There are many different tales explaining how and when it actually occurred to them, and if you asked either of them about its true origins, back in the day, they would turn somewhat mysterious, or – being poets – tell you the story that most appealed to them at that moment. But one version at least is that the name came out of a bit of banter about the tedious necessity of having to earn a living – a constant theme among writers. One of them was talking about the need to ‘keep the wolf from the door’, but the other suggested what they really needed was to keep the wolf atthe door, and the phrase stuck. For them the image pointed to what is exciting and inspiring about the imagination: a sense of wildness, the dramatic, mystery, even of danger.

Most of us, much of the time, are concerned to keep the wolf from the door: after all, we need an income, we need a roof over our heads, and we need to eat! We need to take a steady and disciplined approach to our lives. But do we sometimes let those concerns bury the freer, more adventurous, more playful parts of us? Do we let them smother our vision, our fascination with life, our creativity, our ability to fully experience our emotions and connect with the world? I think for many of us the answer is yes. And to counter that habitual withdrawal, what we sometimes need is a wolf that’s prowling right outside, a spirit from the wilderness that we hardly dare open up to, and that wolf is the imagination. Who knows what such a wolf might do? But in the uncertainty lies the freedom. There is no excitement or adventure without a little danger, and the wolf of the imagination is no friend to security, predictability, containment and generally being sensible. What we hope from our writing weekends is that we will all at least open our doors slightly on such a wild visitation.

Writing workshop: Wolf at the Door
Saturday 18 – Sunday 19 August 10am-5pm
Led by Dharmavadana and Vishvantara
Open to all
£90 Full waged / £65 Part Waged / £55 Unwaged
Booking essential online or in person at the Centre

Coronavirus (COVID-19): The Centre is closed to the public until further notice and we have moved our events online. Sign up to our weekly newsletter for the latest, or follow us on Instagram or Facebook.