Bringing the harpsichord back to life 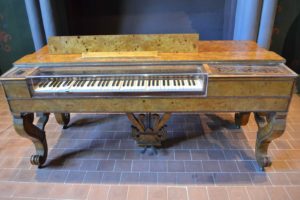 Violet Gordon Woodhouse. Coming to London in the 1970’s, intending to spend a few years studying the harpsichord, I never imagined that the woman bearing this name would lead me into such a variety of musical adventures. I would hear little scraps of information about her in my early years here – that she brought the harpsichord back to life in England after the long period – over 100 years  – of it lying silent and unloved following the development of the piano. I heard that she lived openly in society with her husband and three other men, that her living room concerts were attended by most of the prominent artists and writers of the time and that these concerts held moments of transcendence for those in the room.

It was years before any of these rumours were given more flesh and bones for me. I found myself performing at the Cheltenham Literary Festival on the very day that Violet’s great niece was giving an illustrated talk about the biography she had just written about her beloved great aunt. I raced to her lecture and was enthralled. What came across was the story of a woman of huge determination and talent who against all odds (the first being her father’s refusal to let a daughter study and perform), pursued her music becoming the first person in England to reveal the beauty of the harpsichord and the rich repertoire written for it. She practiced like a demon, performed often and all the while, did indeed create a household in which she and 4 men lived together for more than 30 years in defiance of society’s norms.

The programme that I’m bringing to the centre grew naturally out of many conversations that I had with Jessica Douglas – Home, great niece and biographer of Violet. In telling her story, we wove together diary extracts, letters exchanged between Violet and her men (letters which become increasingly poignant as both world wars take place) and narration. I had the huge pleasure of choosing twelve pieces of music for the harpsichord that I felt would illustrate crucial moments in the story but also act hopefully as a recital of some of the very great music written for this instrument. I’ve performed “Violet” many times over the years and am still struck by how words and music can act upon each other, making the music appear like story-telling which of course it really is, and the words possibly more evocative than if they were standing on their own.

I will be working with two wonderful young actors who have never performed “Violet” before. I look forward to hearing the music that I play as it bounces off their creativity and their new approaches to the text. As ever, it is this coming into the moment, being with what is there and living it, that I love about playing music and in particular this play/concert.