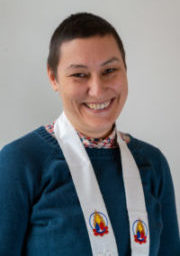 Prajñānītā has been a Buddhist since 2009, when her bicycle collided with a London double decker bus and she experienced a moment of clarity about the centrality of the breath. Since then she has committed herself wholeheartedly to a Buddhist life involving a deep exploration of ethics, meditation and wisdom.

She used to be a teacher and cares deeply about human growth and development. She has been working at the West London Buddhist Centre as the Centre Manager since 2018. When she is not teaching or spending time at the Centre she loves watching old Kung Fu films and going on adventures.