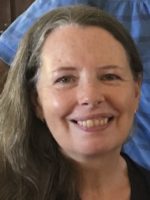 Sudurjaya has been involved in Triratna in London for more than 30 years and was ordained in 2000. Originally from Australia, she has worked as an artist, mother and teacher.  In addition to facilitating mitra study groups, classes and retreats and introducing young people to Buddhism, she has undertaken training as an ecumenical and Buddhist hospital chaplain.