Lucy Shaw’s stage adaptation of Oscar Wilde’s The Picture of Dorian Gray is showing at the Jermyn Street Theatre until 6 July. Here Lucy (a WLBC mitra) writes about her interpretation of the piece in Buddhist-inspired terms as a ‘cosmic myth’ about the consequences of splitting off parts of ourselves in pursuit of perfection.

Soon after getting the call confirming that I was commissioned to write an adaptation of Oscar Wilde’s The Picture of Dorian Gray for the Jermyn Street Theatre, I was on the phone to Bodhilila, my ‘kalyana mitra’ (friend), to tell her all about it. To my luck she is a real Wilde fan, and immediately put me on to his collection of short stories, The Happy Prince and Other Stories. A pleasing stroke of fate, it was these stories, particularly The Happy Prince, that really opened me up to a side of Oscar Wilde that had previously been hidden from my limited perspective of him as decadent and debauched master of wit.

I was warned that adapting someone else’s work would induce a certain amount of possession, and this was certainly my experience! What I discovered was a man who whilst, yes, was decadent and debauched, was also deeply concerned with poverty and social inequality. He delighted in the beauty of form and appearances, but also understood the potency of eternal love that cannot survive an earthly life. 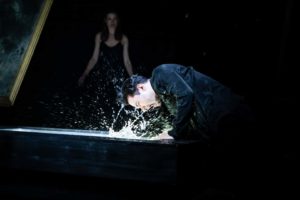 In The Happy Prince, a bejewelled statue of a prince offers every jewel that he possesses to the poverty stricken citizens spied by him from his great height, right down to the last Indian sapphires that are his eyes. This generosity is only enabled by a swallow who takes shelter beneath him, and who, by staying on to carry out the Prince’s requests, misses his opportunity to migrate to warmer weather, and dies in the frost of winter. The Prince, no longer covered in jewels, is stripped down as scrap metal now that he no longer dazzles the townsfolk, though his heart, made of lead, will not melt in the furnace. One of God’s angels recovers the lead heart and the dead bird as the two most precious things in the entire city.

My sense is that Wilde’s aestheticism is a re-enchantment of the world, rather than any sort of nihilistic materialism. He saw beauty and animation in all life, from the darkest drug dens to the most opulent palaces, and all invited him in to a glimpse at whatever else may lie beyond or within. Perhaps the appeal of myth to his work was that quality of the mythic realm, the in between places, neither here nor there but everywhere. The influence of his childhood in Ireland I believe implanted in him what we may call a pagan sensibility, and this magic infuses his work.

Or… maybe we could imagine him rather as a secret Dzogchen master, an ancient Mahasiddhi reborn in Victorian Ireland! I suppose this depends on your take on the Dharma, but more and more I am inclined towards an emptiness of divinity in form, a magic of animation, as I found transmitted through the work of Wilde. His wisdom would certainly be of the Crazy Wisdom variety, so called by Chogyam Trungpa, but it is there. I talked about this with the Buddhist teacher Lama Shenpen Hookham, who commented that as we all have Buddha Nature, there is no reason why it could not have been transmitted through his work, whatever else he may have been struggling with as a man.

Which brings us around to the most striking aspect of Dorian Gray, the cosmic myth at the heart of it, the Faustian Pact in pursuit of perfection. The story portrays the classic split, an attempt to bury our shadow in a hidden place and live out an image of stainless purity. My take is that it is the split which does the most harm, rather than Dorian’s initial desires and excitements. I believe Wilde had a fury against the very notion of sin, ‘forbidden’ or ‘wrong’, which can serve to break us into a sort of death in life. This may not sound very Dharmic, and don’t get me wrong, ethics matter, but so does embracing our full complexity. Why is it that when I feel most shot through with light I can feel all the more drawn to my own particular modes of darkness? Heights and depths aren’t hard for me, but the middle is. An unshakeable, Earthly, green ground with the stability required for a clash from all angles of reality to be embodied forth in human expression, or in other words, life. Life is hard, the Buddha was right about that one. So what does Wilde teach us with this tale from beyond? If that particular pattern of splitting off is having its way with us, to find our way back, to rediscover life, we must let the myth have its ending. And how does it end? Of course, how else? In a death.